Skip to content
President Buhari on Thursday declared a state of emergency on Nigeria’s water, sanitation and hygiene (WASH) swctor. 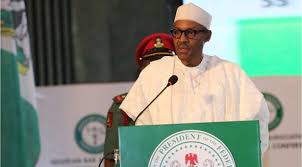 According to a statement by his Special Adviser on Media and Publicity, Mr. Femi Adesina, the President made the declaration while inaugurating the National Action Plan for Revitalisation of Water Supply, Sanitation and Hygiene at the Presidential Villa, Abuja.
He said the declaration has become imperative to reduce the high-prevalence of water-borne diseases in different parts of the country.
The situation, he noted, has caused preventable deaths.

Read also: World Toilet Day School Project
Buhari told the gathering that he was aware that Nigeria did not meet the MDG targets for Water Supply and Sanitation that ended in 2015.
He said, “The Sustainable Development Goals targets (6.1 & 6.2) for WASH are even more demanding as they require WASH services to be provided in adequate quantity and quality on premises at affordable prices.
“This cannot be achieved if we continue with ‘a business as usual’ approach.
“It is on this premise that I fully endorse the decision taken at the meeting of the Federal Executive Council in April this year to declare ‘a State of Emergency on our WASH Sector’.

“I call on all state governments to complement this effort by according the sector similar recognition to enable us work together to achieve the SDG targets for WASH by 2030.”

Buhari said the declaration has become imperative to reduce the high-prevalence of water-borne diseases in different parts of the country.
He described statistics on open defecation, access to piped water services and sanitation in the country as disturbing.
The President said henceforth, Federal Government’s support to state governments would be based on their commitment to implement the National WASH Action Plan in their respective states and to end open defecation by 2025.
He said, “Access to piped water services which was 32% in 1990 has declined to 7% in 2015; access to improved sanitation has also decreased from 38% in 1990 to 29% in 2015.
“Our country now ranks No 2 in the global rating on open defecation as about 25% of our population are practising open defecation.
“WASH services at the rural areas are unsustainable as 46% of all water schemes are non-functional, and the share of our spending on WASH sector has been declining from 0.70% of the GDP in 1990 to about 0.27% in 2015 which is far below the 0.70% at the West African regional level.”

The Role of Biodiversity in Achieving the Global Goals

View all posts by Rufus Ariyo →

A row of Legends

Interstate movement in Nigeria may be lifted on 21 June

Update: Father of a female student who was stabbed to death in Ibadan says she was raped

Lock down placed in Part of Paris

I love looking through a post that can make people think. Also, many thanks for permitting me to comment!

Very good article! We are linking to this particularly great content on our site. Keep up the great writing.

Very good article! We are linking to this particularly great content on our site. Keep up the great writing.